My school received 36 delegates from African state countries on 18 May 2016 to learn about the school's journey in implementing ICT strategies in daily teaching and learning.

I have the honour to showcase an ICT lesson using Tracker video analysis software for students to learn the energy changes in a bungee jump.

Download the Tracker file for Bungee Jump I used in the lesson.


The questions I received during the Q&A session:

Q1. How do you learn about using ICT in your lesson?

A1. My journey starts with an eagerness to use ICT in teaching and learning. I received training as an ICT Mentor to honed my skills and knowledge. I learnt how to use Tracker for teaching Physics through an MOE workshop. I honed my skills when I participated in a research project. Now this has brought benefits to students in my school and teachers, including teachers from other schools.

Q2. Do you need to pay for your training?

A2. No. In Singapore, we have Learning Communities among teachers where I learnt my skills and also share my knowledge with other teachers.

Q3. Is the Open Education Resource @ Singapore be accessible by the world?

A3. Yes. It is on the World Wide Web and you can search it with this term "open education resource@singapore".

Q4: Are the software and simulations under the Creative Commons License?

A4: Yes. Anyone can use the resource found in the library free.

During my conversation with the Research Scientist Dr Elizabeth Koh from NIE, I learnt that the delegates saw the theory they learnt in their workshops came alive when they observed the lesson especially for concepts like: 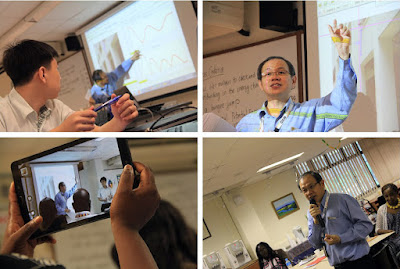 Collage of me in the lesson and Q&A session 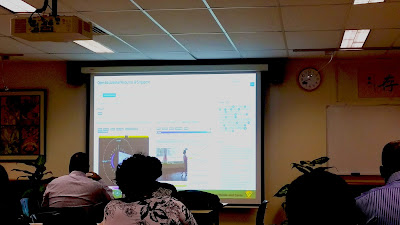 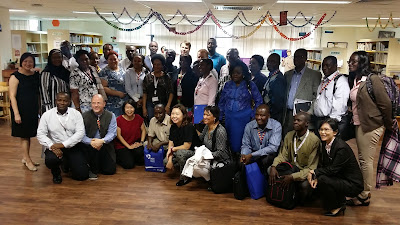 Resource for Singapore O Level Physics 2008 P2 Question (a)
A man starts his jump from a platform above a river  The elastic rope tied to his feet becomes tight when the man reaches point A. The lowest point he reaches is B. 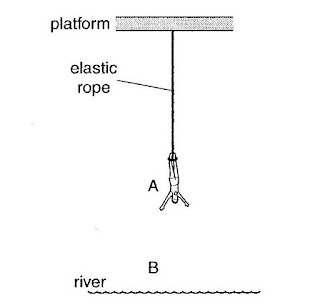 Describe the energy changes as the man falls from A to B.

Below is a video of a simulated bugee jump

I created a lesson package for teachers to use as an ICT-enabled lseeson. This lesson package has been upload to Singapore Open Source Physics library. Do follow the link to download the resource Investigate Bungee Jump using Tracker at OPS@SG. The resource include a Tracker file of the bungee jump, a lesson plan for teachers and a guided lesson note for student.

Resource for students can be found at my Google site for Investing Bungee Jump. Teachers may direct the students to this site during your lesson.

If you find it useful or have suggestions to improve the lesson, do feel free to leave your message here.
Posted by Tan Kim Kia at 22:24 2 comments:

It has been an exciting and rewarding journey so far working with a group of like-minded colleagues in MOE, CPDD, eduLab and in my school.

In the coming Singapore International ScienceTeachers’ Conference 2015 on 12-13 Nov 2015, I am honoured to have an opportunity to present a Case Study Paper.

I hope to achieve the following outcome:

a) To bring across a message that ICT enhanced learning not only complements textbook content but makes the task of learning Physics an authentic real world
experience.

b)  To encourage more teachers to come on board in using ICT, like using of Tracker, in teaching and learning of Physics.

c)  To encourage more teacher to collaborate and co-create resource for teaching and learning of real world Physics.

Notes for teachers and learners who would like to use this TRZ file.


Velocity-time graph for Model A: 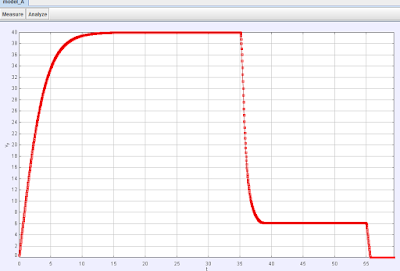 Velocity-time graph for Model B: 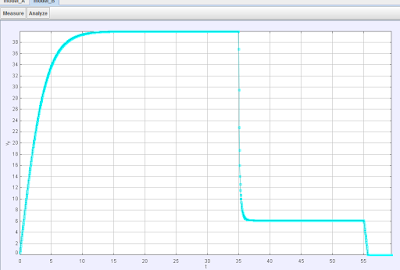 Comparison of Velocity-time graph for Model A & B: 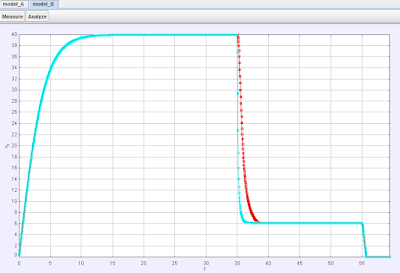 Acceleration-time graph - Model B compared to Model A 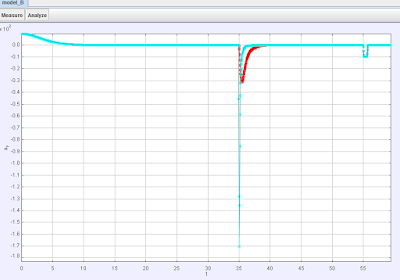 I think it is a bad idea to open the parachute immediate while the parachutist is falling at 40 m/s. In real life, according to a Discovery Education Channel video (https://www.youtube.com/watch?v=ur40O6nQHsw), the parachute takes about 2-3 seconds to open fully.

Ideas for teaching and demonstration:

Adjust the parameters and compare the velocity-time graph and acceleration-time graph.
Download the Tracker zip file for Skydiving Modelling.

You may find the free TRACKER Software at http://www.cabrillo.edu/~dbrown/tracker/

The Physics of Skydiving Explained with Speed-Time Graph


Question: At which point in Fig.1 A, B, C or D is the parachute fully open? 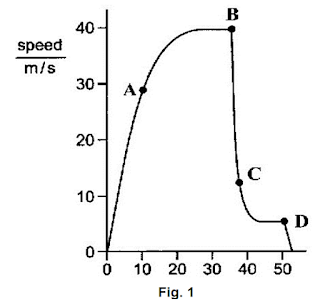 From the moment that the skydiver steps out from the plane, as his weight is the only downward force acting on him, his start to accelerate. As his speed increases, the air resistance increases. The air resistance or drag is proportional to v2 and the perpendicular area of a moving object.
D α v2.A, where area, A, is constant because he does not use any parachute.

This results in a decreasing downward resultant force. Hence, by Newton’s Second Law, the acceleration is also decreasing as his speed increase. This continues until air resistance reaches the same value of his weight.

At this point the forces are balanced, hence he continues to fall at a constant speed, it reaches terminal velocity (A') in Fig. 2. 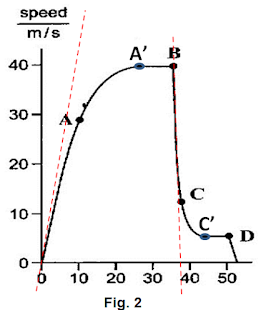 From A’ to B, he continues to fall at terminal velocity.

At point B, he pulls his parachute.

The air resistance or drag is proportional to v2 and the perpendicular area of a moving object.
D α v2.A

At B, the gradient of the speed-time graph is negative and constant from the points of speeds of 40 m/s to 25 m/s.

This suggests that the deceleration at point B is constant. Hence, there must be a constant upward resultant force present according to Newton’s 2nd Law of motion, F=ma.

At point C, supposed that the parachute is opened fully, the area, A is constant in the drag force equation D α v2.A.

The above suggests that at point C in Fig. 1, the pareachute is fully open, not point B as the answer provided by Cambridge Marker's Report for the paper.

He continues to fall at the terminal velocity until he reaches the ground.

For a better visualisation, please watch the video below

Skydiving Modelling using Tracker. The duration of parachute opening is modelled and parameterized in the model.

Using Tracker to understand 'toss up' and free fall motion: a case study

Great news! Journal paper published at IOPScience website.
This paper reports the use of Tracker as a computer-based learning tool to support effective learning and teaching of 'toss up' and free fall motion for beginning secondary three students. 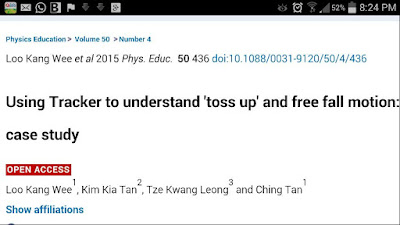 Follow this link to view the paper: Using Tracker to understand 'toss up' and free fall motion: a case study.
Posted by Tan Kim Kia at 00:07 No comments:

The Flame of "Turning Heart"

I was amazed by the "turning heart" when I first saw a video of it. My quest to better understand how it works has ended up me making this video explaining the Physics behind it.  The 'turning heart' in this video was a result of many ours of physical manipulation of a copper wire, a "AA' dry cell and a few very strong magnets which my Primary 5 boy Daniel bought for me at his School Science Fair. The "turning heart" is one of the many father and son science explorations!
Being inquisitive is Daniel! I hope this quality in him will carry him far in his pursuit of knowledge and discoveries in future. Hope to share more with you next time.